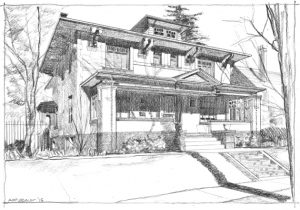 Note the distinctive, original stained glass windows and quartersawn oak flooring with Greek Key inlay in this Denver Square home.  As you enter, to the right is a study which was originally the dining room, evidenced by the built-in china cabinet.  The living room features an Ernest Batchelder fireplace with hand-crafted art tiles. The original footprint of the house was expanded to 3,737 square feet by extending to the back, taking care to replicate the original character with stained-gla 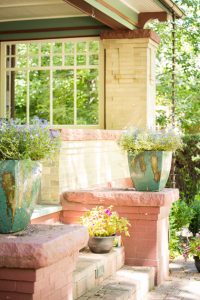 Sara and Eric renovated the first floor in 2013-2014, opening the space by removing a bedroom and bath to expand the kitchen and family room area, which now includes a mudroom, a booth for dining and a breakfast bar and pantry.  The dining room was a pass-through which they closed off to add built in cabinetry and a bathroom with penny tile.

There are four bedrooms, a study and a laundry room on the second floor.  In the master suite, modern windows were added to match the style of the period.  The built-in storage drawers and cabinets in the upstairs hallway are original, as is the pine flooring common in private quarters of homes built around that t 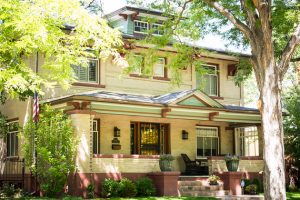 The couple also remodeled the backyard in 2015, adding new landscaping, a fountain and a second patio with a gas firepit for enjoying cool evenings outside. 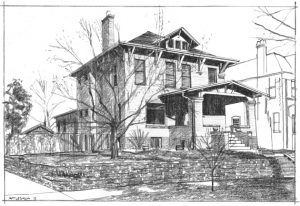 As you enter this 3,000 square foot blonde brick home, notice the original tiling that adorns the front porch and the entryway.  First-floor features include quartersawn oak throughout, a powder room, which was added in the early 1990s and may originally have been a telephone room, and a formal sitting room with a fireplace surrounded by the original tile. The dining room includes wainscoting and the original built-in side board.

In 2006, an extensive addition and renovation project created the existing kitchen.  The red tile fireplace in the new kitchen indicates where the house previously ended. Dan and Lisa chose soapstone countertops, a side sink for craft and baking projects, a study nook, and a steamer oven for the kitchen.  The clever addition of a mud-room at the far end of the kitchen accommodates coats and boots.

Unique features of the re 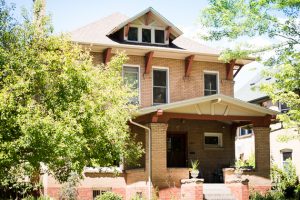 novation include relocating the garage under the house and the addition of theater seating for an “outdoor movie screen.” The basement includes a natur 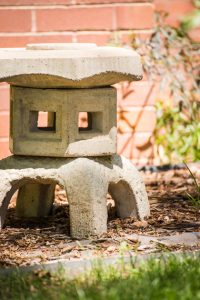 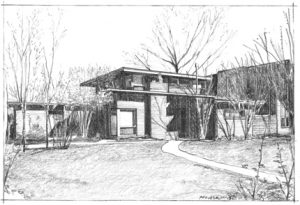 When Bill Weller purchased this midcentury modern home in 2007, it was in such a state of disrepair that it was nearly a year before he could move in. Restoring the Edward B. Hawkins-designed house to its former glory while updating it to accommodate his everyday needs involved replacing the electrical and plumbing systems, installing new heating, insulation, windows, cabinetry, and flooring. Under the creative direction of designer, neighbor, and fellow-Hawkins homeowner Bill McDonald, the home is once again what it was—only better.

A second floor was added, accessed by a floating wooden staircase in a 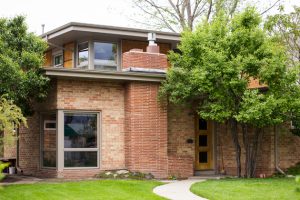 honey blonde finish that matches seamlessly with the plywood cabinetry, paneling, and trim found throughout. The master bedroom features a full bath, spacious walk-in closet, and north-facing balcony. In keeping with the original design of the home, clerestory windows were used throughout the second level, inviting light in while preserving privacy.

On the first floor, the kitchen, laundry room and half bath are all new features. The use of natural and modern materials in the kitchen, including concrete countertops, plywood c 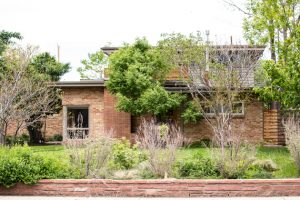 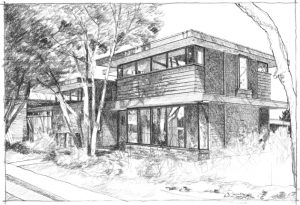 Edward B. Hawkins was a Denver-born designer and developer who, after studying the architecture of Frank Lloyd Wright in Illinois, returned to Denver eager to incorporate his ideas about modern architecture and modern living into his own designs. The development of North Park Hill in the 1940’s provided Hawkins with opportunities to design and build several of his first homes, including this one.

Nearly 60 years after the original construction of this home, it was purchased and renovated (2005) by Bill and Kelly McDonald. Bill, who is an artist and designer, had been restoring homes in the Curtis Park area for nearly 15 years and spotted the potential of the house while driving through the neighborhood. The curb appeal i 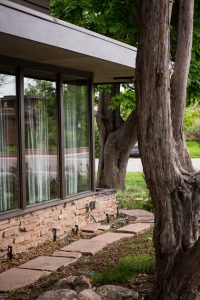 ncluded use of sand brick and flagstone, two materials used in pioneer-era Denver construction. On the interior, Bill and Kelly also appreciated the low ceilings, clean lines, clerestory windows (placed above eye level to maximize privacy and natural light), and Hawkins’ use of structural materials for finish. 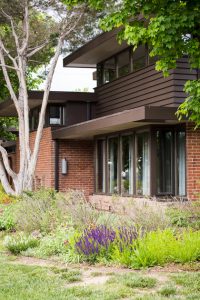 They preserved these features while renovating to meet their family’s needs, which included adding a second floor and converting the attached garage into a home office/studio. The result is a restored and revitalized midcentury modern home with 2,250 square feet of unique living space. 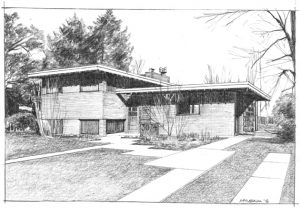 Deva and Joseph purchased their split-level Edward B. Hawkins home in 2008. Joseph, who is an architect and partner with studiotrope Design Collective, collaborated with designer, artist and neighbor Bill McDonald on the preservation and redesign of everything they loved about the house. This included its flat roof, generous overhangs, concrete floors, and interior spaces that

are open to each other and also to outdoor living spaces.

A huge, east-facing, steel-framed glass wall in the dining room, set on a hinge, swings open to an outdoor patio and expansive yard. Inside, the home is awash in natural lighting thanks to windows, walls, and doors that invite in the sun. While these features are aesthetically pleasing, they’re also part of the passive solar building design that distinguished Hawkins from other designers of his time. Windows, walls, and floors collect, store, and distribute solar energy in the form of heat in the winter while generous overhangs protect it from direct sunlight in the summer months.

Bringing what’s outside inside is a theme in this home. The red Roman brick on the ext 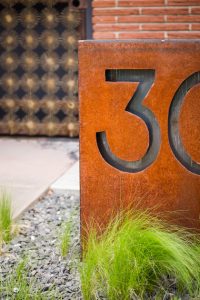 erior is also used in an interior wall in the living room, as is Colorado Sandstone which frames the fireplace. The original 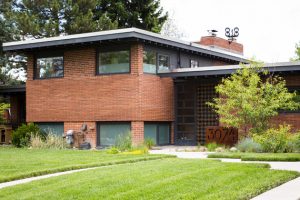 blonde wood wall and ceiling paneling have the effect of lightening things up in the home, as do colorful accent walls and furnishings. Metal kitchen cabinets (circa 1950s) upcycled from another home renovation project and repainted by a local auto painting shop in “California Sunshine”, pops against dark wood and concrete countertops. 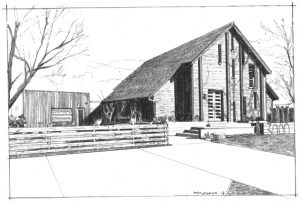 This former church was built in Littleton in the 1970s and relocated to Park Hill in the late 1990s. Current owners Valissa and Mike saw its potential as a unique home and work space.

With 30-foot-high ceilings, the sanctuary-turned-great room marries some of the church’s original architecture with rustic, modern and industrial elements into a space that is at once funky and practical, warm and airy, traditional and eclectic. Acoustical tiles were removed from the ceiling to reveal tongue-in-groove paneling that was meticulously restored over several weeks. Two large vertical windows were added to the east side of the home to mimic the seven original windows on the west-facing wall. 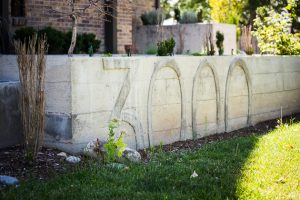 The open kitchen, like the rest of the home, blends rustic and contemporary elements. The cabinets and refriger 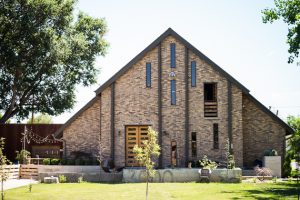 ator panels are custom made from reclaimed wood, while the countertops are covered with poured-concrete slabs.

The altar was transformed into two bedrooms for the boys, connected by a “Jack and Jack” bathroom. Directly above the bedrooms – and accessible only by ladders – is a loft that the boys use as a lounge. Across the way, the master suite, located in what was previously the choir loft, feels like a treehouse — the master bath features a sunken tub below a skylight, perfect for soaking and daydreaming.

With another nod to the building’s history, Valissa and Mike left the “pastor” and “pastor’s wife” parking signs. 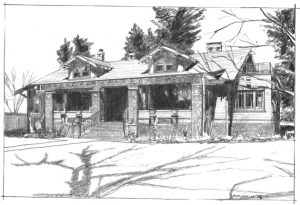 This 6,700 square foot craftsman home has been in the Huff family for generations.  Joe’s parents, Majon and Shirley Huff, bought the home in 1958 and Joe lived here until 1972. After Joe’s parents passed away, Joe and Cheri decided to renovate the home and began an ambitious remodel in 2009, keeping much of the original style.

The living room has as its focal point an original Ernest Batchelder fireplace with Arts and Crafts movement hand-crafted art tiles.  The Brambach grand piano in the living room was Joe’s grandmother’s and was a wedding present to the couple.

The French country-style kitchen incorporates the original bead board style from the front porch.  A few unique features of the kitchen are the stove, which is in the island, and the 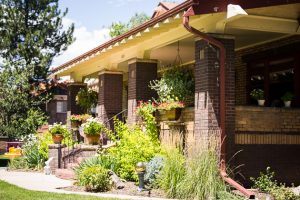 built-in espresso maker below the microwave. Also on the main floor is a lovely library and study. The incredible master suite was Joe’s childhood bedroom.

The upstairs renovated space is designed for relaxation and entertainment, complete with a built-in kitchenette.  The Huffs left the unearthed exposed brick chimney in the guest bedroom.  The upstairs bathroom tub is or 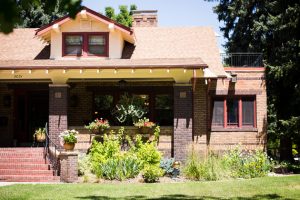 iginal; the tile is a replication and the double vanity is new, but of the period.

In the basement is one of the most incredible features of this renovation:  a theatre and bar which has been designed with broken up surfaces that make for amazing sound quality.